In 1943 during WWII EB White was asked to explain What is Democracy? His answer frames and captures the essential answer nicely.

It is the line that forms on the right.

It is the hole in the stuffed shirt through which the sawdust slowly trickles; it is the dent in the high hat.

Democracy is the score at the beginning of the ninth.

It is an idea which hasn't been disproved yet, a song the words of which have not gone bad.

It's the mustard on the hot dog and the cream in the coffee. 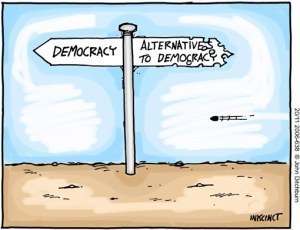 I consider the information revolution in progress, its impact upon being human, and the post-modern digital-swish. How does the info revolution change organizations, tools, and our global perceptions? Open-ended adaptable systems outlast closed rigid systems in the long run ... that's where my mind normally ends up. Language not only describes reality - Language creates the reality it describes. We should all tell better stories. Family guy, Socratic Tinkerer. Opinions expressed are mine alone.